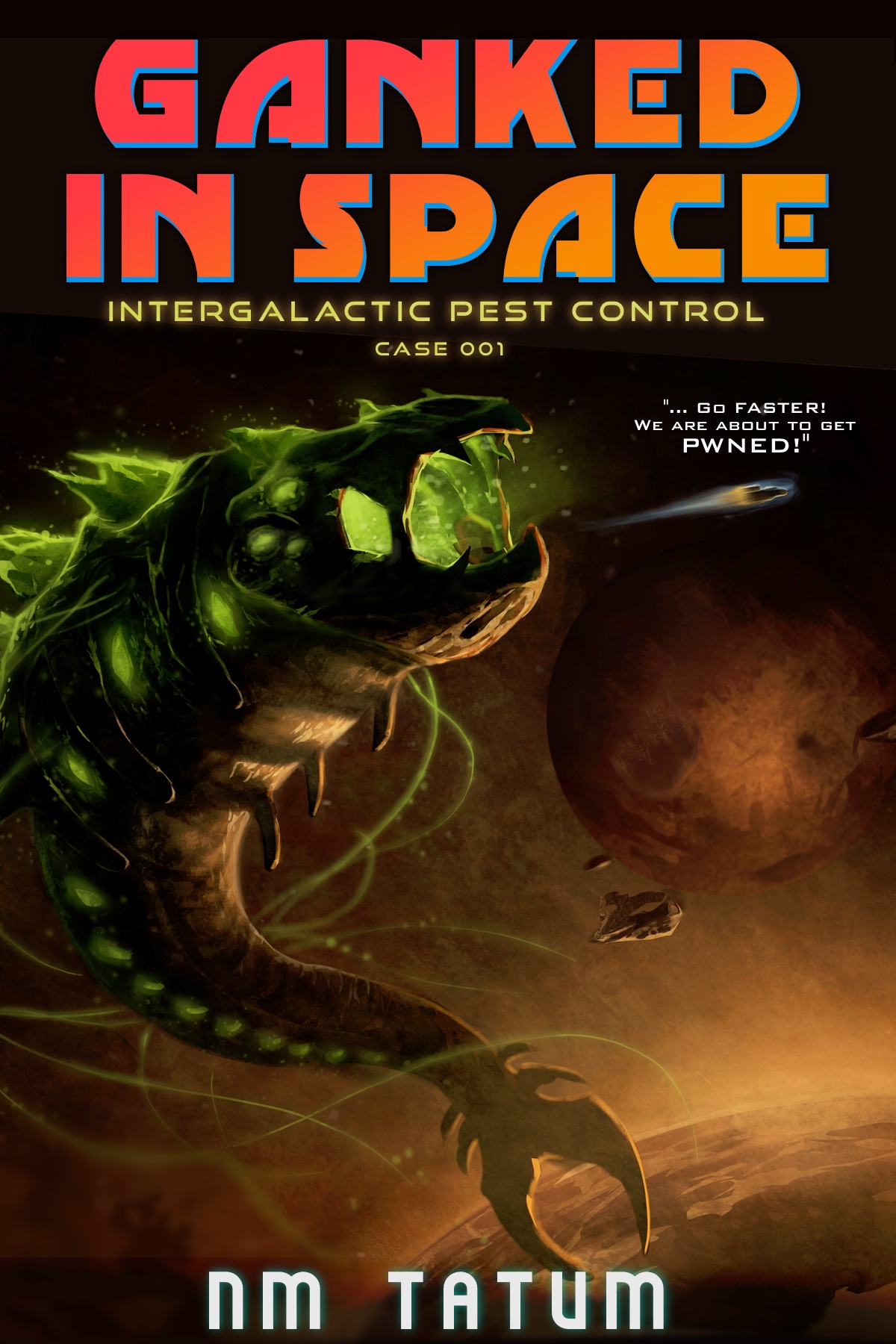 “I hate my job. I hate my job,” the portly custodian, Lonnie, sang. He belted out those four words with the heart and conviction of a soul singer as he danced his mop across the cafeteria floor of the deserted Sector 12 Transgalactic Station. He signaled the sensors flicking the lights on as he went, waking the station up.

Lonnie had the express privilege of being the first one to step foot on main floor of the station each day, and clean up the filth left behind by the final shift from the previous night. His arrival beat Grover’s from Maintenance by an hour.

Lonnie was a ten-year veteran of the station’s custodial staff. During his latest anniversary celebration, the management and human resources team pitched in to get a tiny plaque engraved with the words ‘Lonnie’s Paintbrush,’ and affixed it to the handle of his mop. They frequently made the joke that Lonnie was an artist in the way he cleaned the shit-stained bathroom floors.

He’d forced a laugh when his bosses, and a handful of people who otherwise pretended he didn’t exist, presented it to him. Worse still, he’d forced a ‘thank you.’

“Thank you for this backhanded appreciation of the job that I do every day. Thankfully I’m cheaper than bots or I’d be out of a job, you credit-pinching assholes. Thank you for laughing in my face, if you choose to acknowledge my existence at all.”

That was what Lonnie wanted to say. However, he could never say that aloud. That wasn’t the place of the galactic blue-collar worker.

The radio on his belt buzzed. “You in, Lonnie?”

“Every day for more than ten years you’ve asked me that, Grover, and every day, I’ve been here.”

“You ain’t hit the sublevels yet, have you?” Grover asked.

“You know my routine, Grover. I don’t hit them levels ‘til damn near nine.”

“You might wanna hit ‘em up a bit sooner, friend. It’s a sour sight down here in sublevel two.” Grover’s voice tightened.

Lonnie let out a long sigh, and his mop felt heavier in his hands. “What sort of mess are we looking at?”

“The sort that’s gonna require much more than that mop of yours,” Grover said. “I can’t say what it is. Maybe some sort of…excrement?”

A fire lit in Lonnie’s belly. “Damn techs must’ve had a party again. They did the same thing a few years ago. They like to make their own booze out of the junk they grease the wheels with down there, and then they lose control of their bowels.”

Grover made a noise of disagreement. “This ain’t nothing like no human could make. I don’t know, maybe it’s—”

His voice cut out.

Nothing but dead air.

Lonnie shook his head, putting his radio away. “Probably slipped in it,” he mused aloud. “And with that hip of his, ain’t no way he’s getting up on his own. Best go lift the old man out of the shit.”

He jabbed his mop into the bucket and pushed the whole apparatus down the corridor, toward the elevator. He drove it inside the compartment and pressed the button for sublevel two. A strange sensation knotted in his stomach, like his guts knew something he didn’t. Or maybe it was just the half-pound of bacon substitute and fifth of whiskey he’d had for breakfast. Either way, by the time the elevator slowed to a halt, Lonnie felt like doubling over.

The calm was the first thing that hit him when the door slid open. There were only two people on this part of the space station, so he expected it to be quiet, but this was different. This was like the calm at a graveyard. An oppressive quiet. The kind that hangs on death.

The smell hit Lonnie next. It immediately soured his belly and curdled everything in his guts. He gagged, grabbed his stomach and tried to hold his breath. It was no use. The bacon and whiskey burned on the way back up.

“Cleaning up after my own damn self,” Lonnie muttered, looking down at the new mess at his feet. “Something ain’t right about that.”

The smell in the corridor was thick and coated the inside of his nose and throat, seeming to crawl all the way down to his belly. It was metallic and reeked of rotten meat.

Wiping the corners of his mouth, Lonnie stepped further down the passage of sublevel two. He only had to walk fifty feet, to the first control panel alcove, to find the source of the smell. It was that stuff that Grover thought was excrement. Now, seeing it, Lonnie thought Grover might have been right. It definitely didn’t belong to any human.

“Hello? Grover, I’m here!” Lonnie called out. He tried to breathe through his mouth as he stared around the darkened area.

“Grover, where you at?” Lonnie tried again, growing more worried about his friend with each unanswered call.

The corridor was lit with only the secondary lighting along the floor, casting it in an eerie glow. Add to that the random sounds of machines clunking and gas valves equalizing, and the entire floor was a county fair funhouse, twisted by the heat and the dark and stinking of vomit.

Lonnie followed the trail of dim lighting, not knowing exactly why. He knew he should turn around and get right the hell out of there, just like most know when they should leave a place, but his body refused to let him, like an act of mutiny.

His legs forced him to move forward several yards until he found Grover.

He stifled a gasp, trying to keep down the rest of the contents in his stomach.

Lonnie found Grover’s foot first. His left foot, severed above the ankle. Following the trail of blood and nearly slipping on it, he soon came upon Grover’s arms, one of them gnawed to a stump, the other largely intact save for a few missing fingers. His head sat just a few feet away. If not for the bloody nub of a neck, Grover would have just looked like he was sleeping, the way he looked on his breaks, leaned back in his chair in the breakroom. Peaceful-like.

But this wasn’t a break, and it sure as shit wasn’t peaceful. There were never any monster bugs on Grover’s breaks.

Lonnie nearly yelled out when he found the beast crouched over his friend’s torso, which was ripped open to display his insides. Though, most of his insides seemed to be missing. The monster turned its attention from crunching poor Grover’s ribs to Lonnie, who stood motionless, his mouth hanging open wide. The monster’s needle teeth dripped with green poison from behind a set of garden-shear-sized pincers. Its yellow eyes glowed like the muzzles of two blasters.

Lonnie froze at the sight of it, confronted as he was by the most terrifying thing he’d seen, it was beyond his nightmares. But the blood and parts of his friend quickly shook him from his state of uselessness. He turned on his heel and ran, sliding back and forth on the excrement or whatever it was, nearly falling to his ass several times.

Lonnie ran until his lungs burned and his old joints ached. He heard skittering behind him, the sound of the thing closing in, ready to rip him to pieces just like Grover. He slammed into the elevator door and stabbed the button repeatedly with his finger.

The thing rounded the corner, a ravenous look in its eyes. The damn elevator doors were taking their damn time opening. Lonnie could feel the vibration of the doors as they attempted to open.

As if feeding off his adrenaline, the bug lumbered forward, head down.

The doors bounced open, hesitating like they were catching on something on the track. Lonnie jumped inside, slamming his hand on the button for the main floor. The bug sprinted, suddenly moving fast, its legs making a scratching noise on the floor. The elevator doors closed just as the thing slammed into them, making an awful crunching noise. The ride up felt infinitely slow, making Grover’s insides squirm with unease.

When the elevator made it to the main level, Lonnie darted through the doors, not waiting for them to open all the way, and sprinted to the administrative office. In all his ten years, he’d never used the red phone before—it was only to be used in the direst of emergencies.

“Yes, hello?” he panted into the receiver. “This is Lonnie DelMonico, head custodian for the Sector 12 Transgalactic Station. I’ve got a situation.”