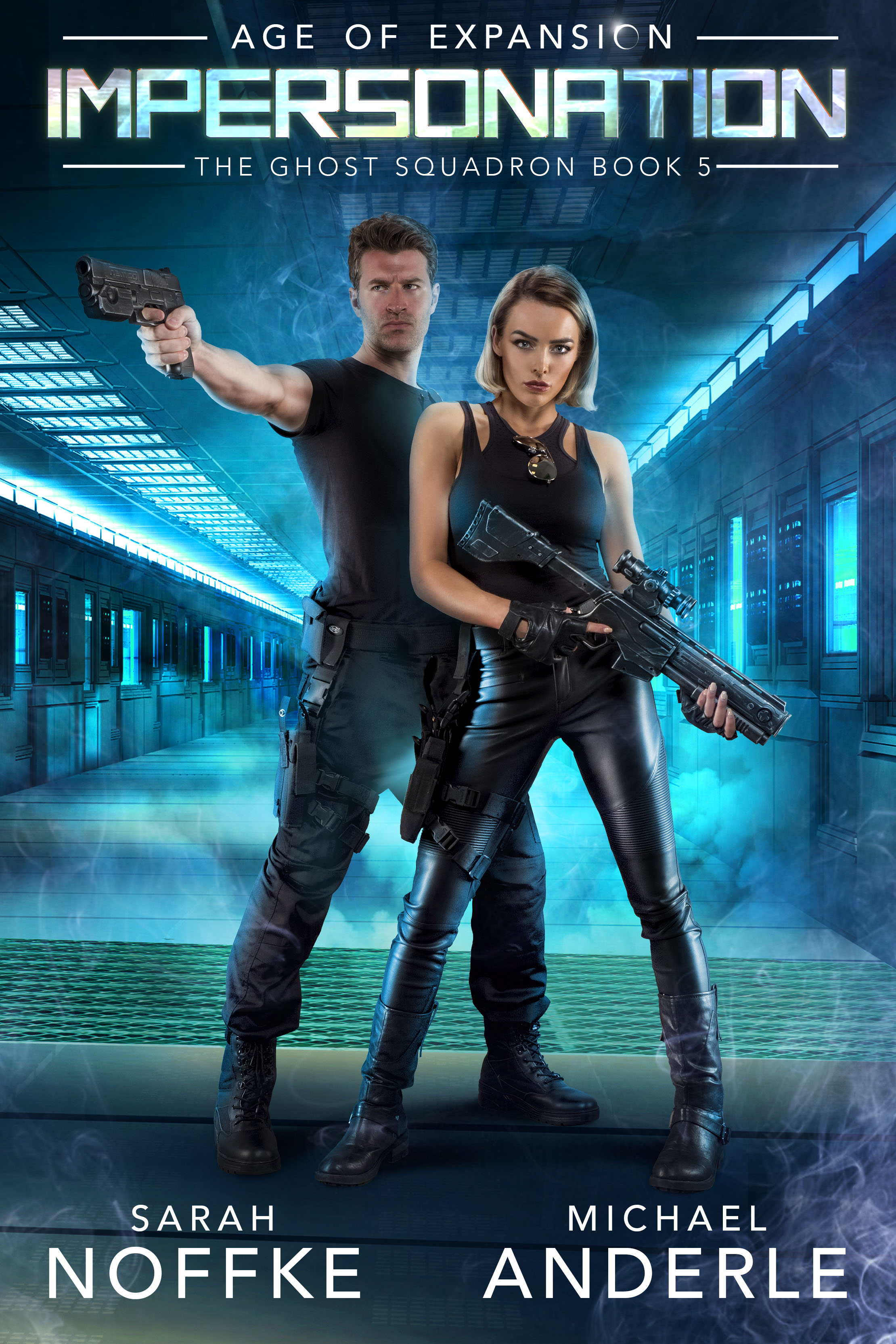 Although technically Ricky Bobby was both her and Eddie’s ship, for simplicity’s sake Julianna had been brief with Dex. She never tired of saying it…“her ship.” She popped out of the Q-Ship after landing on Ricky Bobby, motioning to the closest crew member.

“Parts need to go to Dr. A’Din Hatcherik’s lab,” she said, striding around a construction area. The whole ship was in renovation mode, which was why Eddie hadn’t accompanied Julianna.

“Tell me it wasn’t any fun,” Eddie said to her. He was standing on the top step of a ladder holding a beam up with one hand, although it was incredibly heavy. Knox stood on a neighboring scaffold with a fistful of wires, and his brow was scrunched as he worked on the repair.

“It was so fucking boring.” Julianna pretended to yawn. “The pirates didn’t even put up a serious fight. It was over before I knew it.”

Lars set the transport ship down with ease, and a sort of smile could be seen on his face through the windshield. The Kezzin had obviously enjoyed returning to his home planet, a place he’d never thought he’d see again. And seeing his brother’s face when he’d landed the transport ship had been priceless, even for Julianna. Sharing someone else’s pride-filled moment was almost as good as having one herself.

“Did you get everything I asked for?” Hatch asked, waddling out from behind the cargo boxes that had already been unloaded.

“Not only did I get everything on your Christmas List,” Julianna began, “I also got you a surprise.”

“Surprise?” the Londil queried with skepticism on his octopus face.

“Check it out for yourself.” Julianna motioned to the lowered ramp at the back of the transport ship.

Hatch rolled his eyes but hurried over, curiosity obvious in his expression. He paused in front of the open door, his mouth popping open. “Is that…”

Julianna crossed her arms and nodded proudly. “It is.”

“How did you get this?” Hatch asked.

Giving me credit…that was nice of you. I’m not interfaced with the ship yet, chirped Pip in Julianna’s head.

Which means you couldn’t have told on me if I had taken credit.

“Tell Pip that I owe him. I’ll have him interfaced with the ship soon to show my gratitude,” Hatch said.

“I’m not sure that should take priority over upgrading the gate drives,” Ricky Bobby said from the speakers. “They aren’t up to Federation standards, and if we need to make a quick exit that will pose a problem.”

Julianna smiled inwardly. AI rivalry. She’d suspected this would happen. Ricky Bobby had transitioned to Unsurpassed without issue, and having her old AI in charge of their new ship felt incredibly right. However, there were still things that would take time, and integrating the two AIs was one of them.

“What is it? What did the Commander bring you?” Knox asked, hurrying over after climbing quickly down. The guy wasn’t afraid of heights, and was as coordinated up high as a monkey in a tree.

“It’s…it’s something I’ve only seen pictures of,” Hatch said as a crew member pushed the Stutz Bearcat down the ramp and onto the deck.

Eddie strode over and halted beside Julianna. “How did you score a Stutz Bearcat?”

“I asked,” she answered frankly. “I simply asked.”

“Damn that Fregin charm. If you ever use it on me I’ll be in trouble,” Eddie said.

Julianna shook her head. “Captain, I think you’re confusing a simple request with some sort of magic.”

“Your knack for persuasion,” Eddie said, winking at her.

“Again, I simply asked, ‘Can you include the car?’ That’s how it happened,” Julianna explained.

Eddie shook his head and whistled. “Damn, that mechanic never stood a chance.”

“Teach, you’ve been inhaling paint fumes for too long,” Julianna said, and strode over to Hatch. He was already flattened under the old car.

“Julie, this is incredible. I never expected to own a gem like this,” Hatch said, his voice vibrating with excitement.

“We’re glad you like it. Think you’ll be able to restore the car?” Julianna asked.

“The engine needs to be rebuilt,” Hatch said, sliding out from underneath the Bearcat.

“And the hoses all need to be replaced,” Knox added from under the hood.

Hatch slapped two tentacles together jovially. “But yes. We can have this baby up and running in no time.”

A cough echoed from overhead.

“Yes, of course. Ricky Bobby is right,” Julianna said, taking the mild hint from the AI. “We need to get the gate drives online first.”

“And the cloaks,” Eddie added.

“Yeah, yeah. You’ll get your ship upgraded,” Hatch grumbled as he waddled off. “Can’t even take a day off for my hobbies.”

Knox ran after him, almost bouncing. “Think how good that car is going to look next to your Bugatti and the Volkswagen bug.”

“Only a few more, and my collection will be complete,” Hatch said to the young mechanic as they sped off. “A ’57 Corvette, a 1970 Plymouth ‘Cuda, a DeLorean…” His voice faded as they walked out of the bay.

I found interesting information on the VW bug, Pip interjected in Julianna’s head.

Like the fact that it was commissioned originally by Adolf Hitler?

Like the fact that making out in the backseat is considered extremely uncomfortable.

How… What? We really need to restrict the things you can search for.

Speaking of searching, I’ve been doing more enquiry on this vegan business.

Eddie gave her a curious glance. “Pip?” he asked, having read it on her face.

If I was in the captain’s head I could easily share the information I found on vegan recipes. Did you know there’s a cashew cheese that’s very smooth?

No. And no. There’s no way I’m giving up meat or cheese.

This is about living your best life, Julianna.

I’m starting to consider that involves ending you.

“Julianna and Eddie,” Ricky Bobby called. “Jack requests your presence in his office.”

Julianna sighed, laughing to herself. She could never guess what crazy thing Pip would come up with next.

“Tell him we’ll be right there,” Eddie said, laughing too.

Although he wasn’t privy to the jokes, he still seemed to enjoy the entertainment Julianna got from Pip. Maybe she should consider allowing him in both their heads. She just wasn’t sure how that would change things.

Feb 26, 2018 | Posted by AuthorSarahNoffke in Uncategorized | Comments Off on Snippet 2: Impersonation, Ghost Squadron #5